In term life insurance, cover is purchased that will pay a certain sum if the insured person dies within the term of the contract (usually a year, but it could be 5, 10, 15, etc. years). Since the insured are generally healthy, the insurer has a very low probability (maybe as low as 1%) of paying out, which means that the insured can obtain cover for a low premium. The major downside for the insured party is that there is no obligation to renew cover beyond the original term, so a person acquiring a terminal illness within the term of the cover won't be able to obtain a renewal.

The insurance contract generally provides for a fixed benefit B in the event of death. Thus the payout P can be modelled using a binomial distribution as:

An insurer offering term life insurance will have a portfolio of people with different q values and different benefit levels B. One could calculate the distribution of total payout for n insured persons by summing each individual payout:

This is often called the individual life model. It is rather laborious to determine for large n. An alternative is to group insured people into the number nij who have similar probabilities qj of death and similar benefit levels Bi:

De Pril (1986, 1989) determined a recursive formula that allows the exact computation of the aggregate claim distribution under the assumption that the benefits are fixed values rather than random variables and take integer multiples of some convenient base (e.g. $1000) with a maximum value M*base, i.e. Bi = {1...M}*base. Let nij be the number of policies with benefit Bi and probability of claim qj. Then De Pril demonstrates that the probability p(x) that the aggregate benefit payout X will be equal to x*base is given by the recursive formula:

The formula has the benefit of being exact, but it is very computationally intensive. However, the number of computations can usually be significantly reduced if one accepts ignoring small aggregate costs to the insurer. Let K be a positive integer. Then the recursive formulae above are modified as follows:

Dickson (2005) recommends using a value of 4 for K. The De Pril method can be seen as the counterpart to the Panjer's recursive method for the collective model. Use the Aggregate DePril window from ModelRisk to apply this method.

The compound Poisson approximation assumes that the probability of payout for an individual policy is fairly small - which is usually true, but has the advantage over the De Pril method in allowing that the payout distribution is a random variable rather than a fixed amount.

Let nj be the number of policies with probability of claim qj. The number of payouts in this stratum is therefore Binomial(nj, qj). If nj is large and qj is small, the Binomial is well approximated by a Poisson(nj*qj) = Poisson(li) distribution (

is a good rule). The additive property of the Poisson distribution tells us that the expected frequency for payouts over all groups of lines of insurance is given by:

and the total number of claims = Poisson(lall). The probability that one of these claims, randomly selected, comes from stratum j is given by:

Let Fj(x) be the cumulative distribution function for the claim size of stratum j. The probability that a random claim is less than or equal to some value x is therefore:

Here the insured are covered for their entire life providing the premiums continue to be paid, so a payment will always be made and the policy accrues value over time. Some policies also allow the flexibility of withdrawing cash from the policy. Thus permanent life insurance is more of an investment instrument for the policyholder with a final payout determined by the death of the insured. Determining premiums requires simulating the possible lifetime of the insured and applying a discounted cash flow calculation to the income (annual premiums) and costs (payment at death and administration costs over the life of the policy). 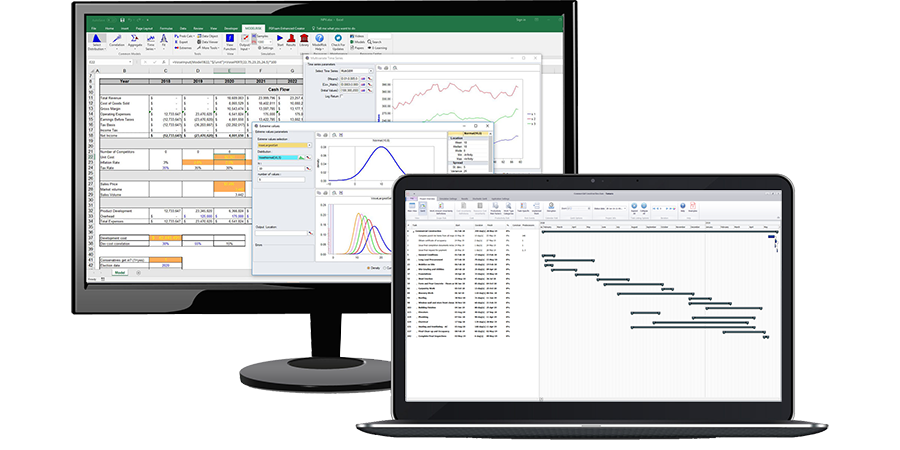